So, a few hours into our drive home from Munnar to Kerela I noticed a couple of small shacks selling something by the bottle with painted letters TODDY on the doors. I asked Jose, our driver what Toddy was and if it was anything like a Hot Toddy or indeed was it alcohol at all? He didn't seem to understand and so we left it there. An hour later as we were feeling dreary we pulled into a backstreet bar. "Are we stopping for lunch, it's quite early!" and Jose replied "I bought you here for Toddy... here, the best"
Okay, so we sat down in a partitioned family room none the wiser to what was coming. I wasn't expecting the open, slightly dirty bottle of milky water looking solution in front of us. It has mosquitoes floating at the surface but we were given two glasses, so guesses were we were start pouring! Ah, not before we were given a tea strainer... so, at least we can filter out those mozzies then. Nick took the first brave sip and said he quite liked it. I went for it, fully aware the waiter and Jose were staring at me in anticipation of how I would react. "Mmm...interesting" (faint smile)
Oh Jeez, we were given a whole bottle of what smelt like a spirit but how I can only describe tasted like a Spanish white wine and garlic sauce for Clams. Rancid.
After a moments of asking what the hell it was we were drinking, and an attempt to stall the sipping, we learnt it was a Palm wine. A mildly intoxicating drink that is made from Coconut Palm sap. It's tapped, bottled and left for a couple of hours before drinking. It is supposed to be sweet...my only guess is that ours had been left over night as it had surpassed the sweet stage and developed into something pungent and acidic. Ah well, I came to India to try new things and it was an experience, though no more toddy for me please. 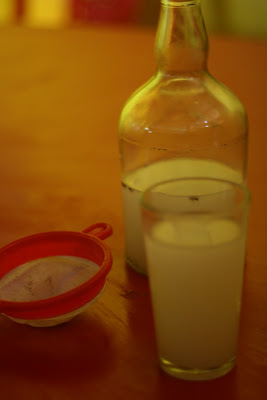 All the empty soda bottles ready to refill with Toddy 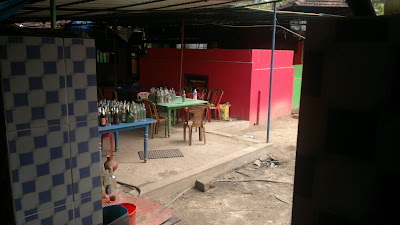 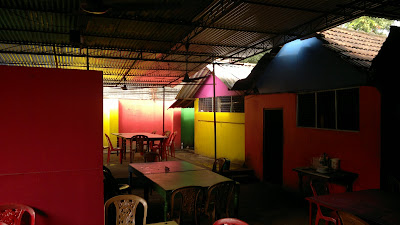