The fig tree at my parents' is a pretty big deal for me. As kids, my sister would nimbly leap from one branch to the next, hoisting herself up through the top canopy of leaves and balancing on the highest branch in seconds. I, on the other hand would take one branch at a time, cautiously testing every step. I would move past up her penknife carvings with such triumph, but never dared balance at the top. It is here that I hid in when I learned that my grandmother had passed away. I sat on my 'thinking branch' for what seems like hours, in utter despair. It was my grandmother that carved the trunk at the base from which to venture. 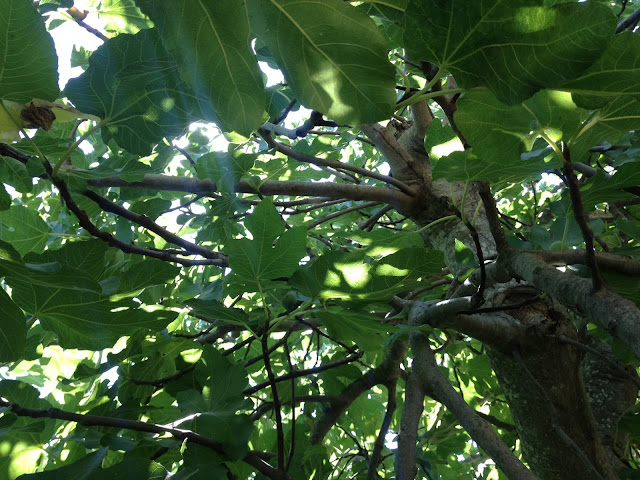 Nowadays, I pass by and pick the odd fig, tear in half to expose the soft flesh and devour with sticky fingers. I am also very fond of a chilled fig, but they don't last long in the fridge. A couple of days ago, I found myself inside the tree, with my niece on my shoulders with a breadknife, reaching for those cracked skin. We popped them in the fridge and by happy coincidence a fig recipe landed in my inbox via the Ottolenghi newsletter. I'm so glad I made the little effort to make these figs: we had everything on hand, except the mascarpone but they are delightful with Greek yogurt. I halved the cooking time, as I wanted to keep the form and texture of the fig. They were delicious warm, but equally good cold. 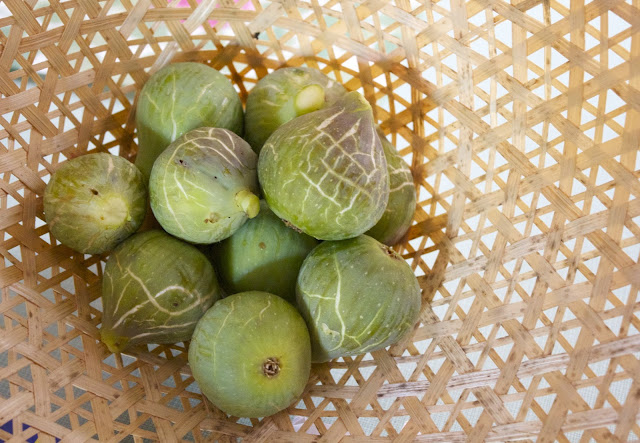 Put together in a large mixing bowl the pomegranate molasses, lemon juice, 1 tablespoon of the sugar, 2 thyme sprigs, 1 tablespoon of water, the orange skin strips and a pinch of salt. Mix well to dissolve the sugar and then stir in the figs. Set aside to marinate for 30 minutes.
Meanwhile, whisk together in a small bowl the mascarpone, yoghurt and icing sugar until smooth. Keep chilled.
Remove the figs from the bowl (keeping the marinade) and arrange them snugly inside a small baking tray, roughly 20x20cm, the cut side facing up. Sprinkle the figs with the remaining sugar and put under a hot grill, clearing about 15cm from the grill. Grill for 10 minutes, or until the sugar has caramelised and the figs softened.
Meanwhile, pour the marinating liquids into a small saucepan, bring to the boil and then simmer for 2-4 minutes or until the sauce is reduced by half and has a consistency of runny honey.
Transfer the hot figs to serving plates and spoon over any leftover syrup from the baking tray, then drizzle over the sauce reduction and sprinkle with picked thyme leaves. Place a spoonful of the yoghurt cream on the side or on the figs and sprinkle over the remaining orange zest. Serve at once. 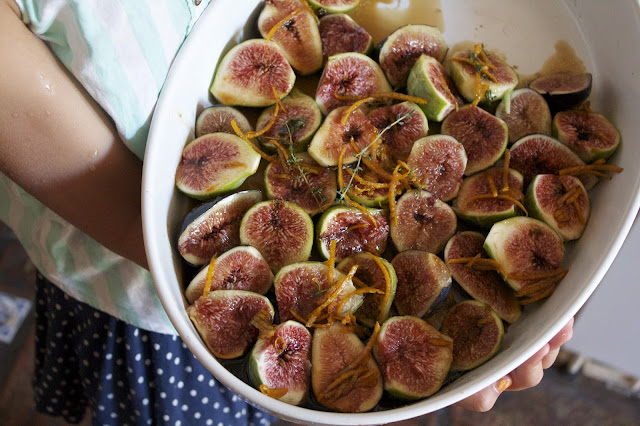 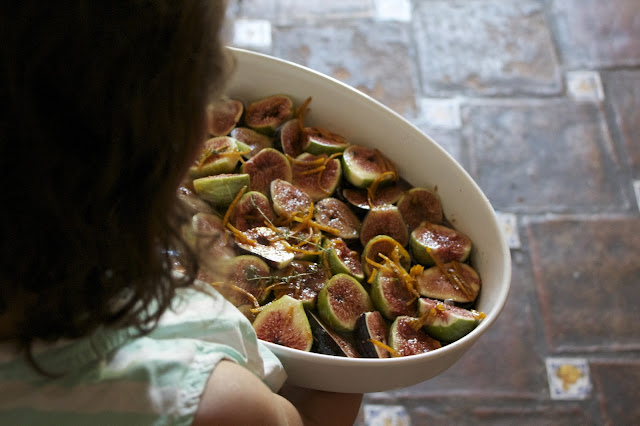 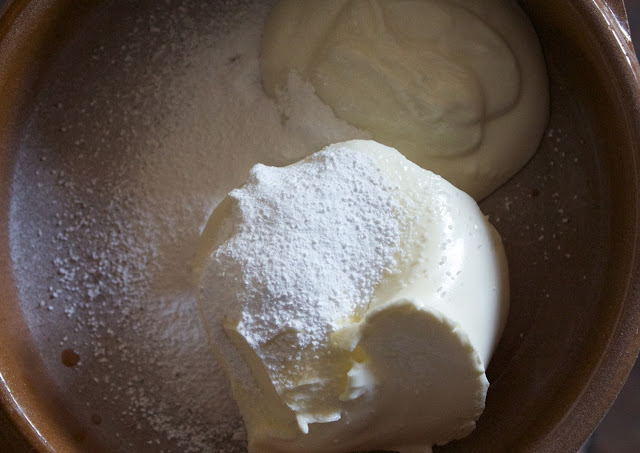 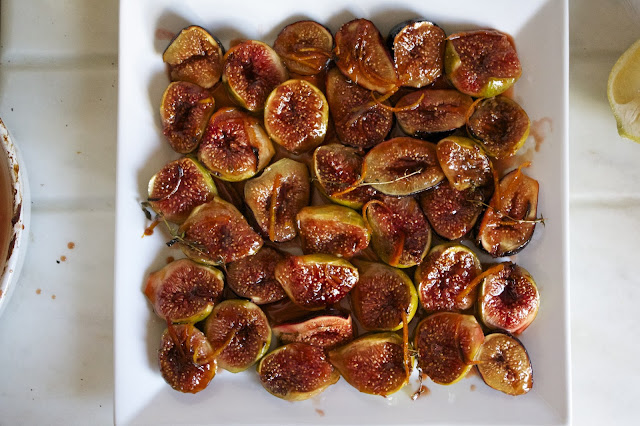 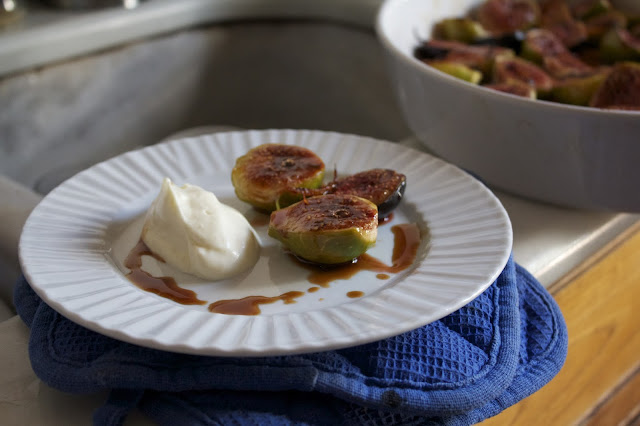 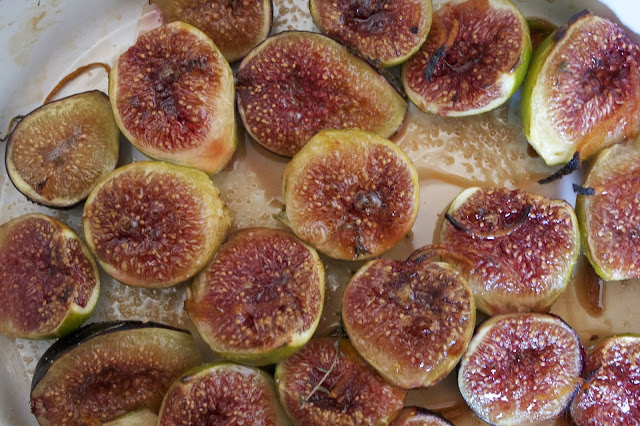 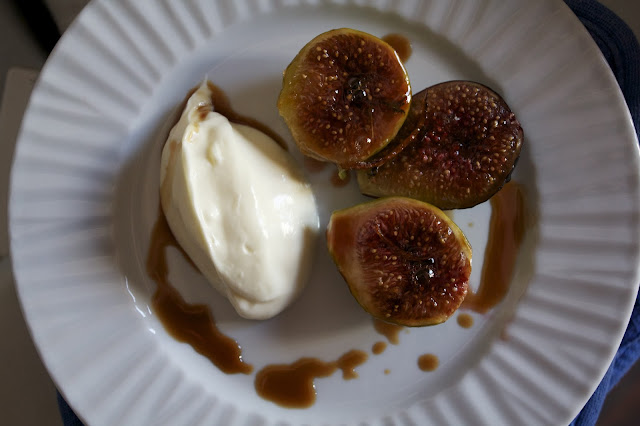 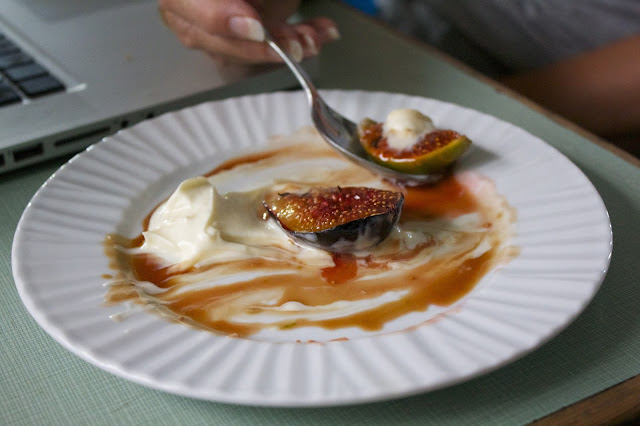 If you can get hold of fresh figs, with a bit of 'give in the squeeze', please try this recipe, it's a good one and the figs last a while!
Posted by Milli 11 comments:

Peach in my salad?

Sam and I made empanadas to help bridge that tummy rumble of a gap between lunch at 2pm and dinner at 10pm. It totally makes sense to me that the Spanish eat so much later, what with having a Siesta and the air being much cooler and more bearable later at night. The problem is, it does make me snack! I would normally make a sort of ragu type filling with just beef but Sam added some morcilla (Spanish blood sausage) and it was kind of revolutionary. I will make them again, jot down the recipe and post it here because I don't want anything else to accompany a cold beer ever again. (I exaggerate.) 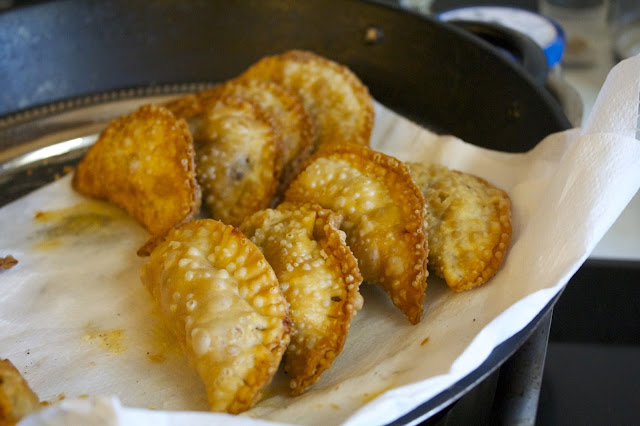 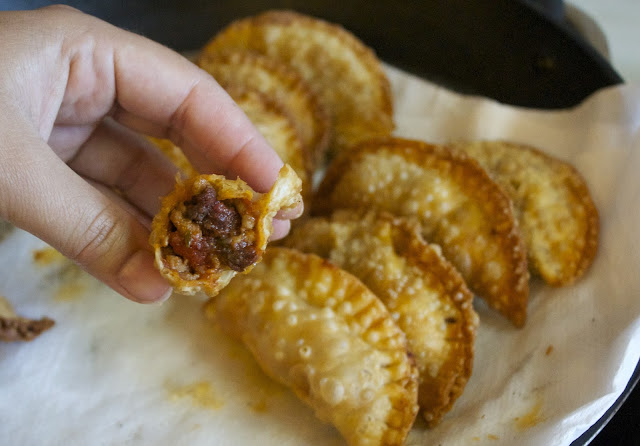 Meet Billy, our new pup. He's adorable but has little teeth like needles and loves a little nibble on your skirt/ankle/towel. The wafting scent of beef empanadas gets his tail wagging. 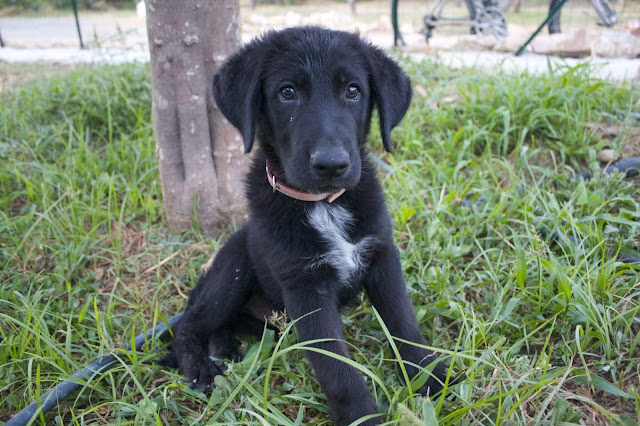 To counteract such fried delights there have been plenty of salads this week, I haven't snapped many but this one was too pretty not to. I roasted the plum tomatoes with garlic and thyme and griddled the aubergines dry. Meanwhile, the mound in the middle was quinoa, chickpeas, pinenuts, peppers, tomatoes, slow cooked onions, coriander, mint and WHITE DONUT PEACHES. They were looking wrinkly, so tossed them in and the little bursts of sweetness were a surprise delight! 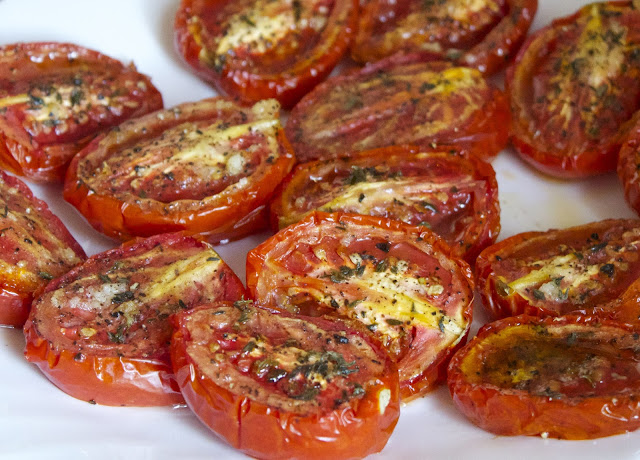 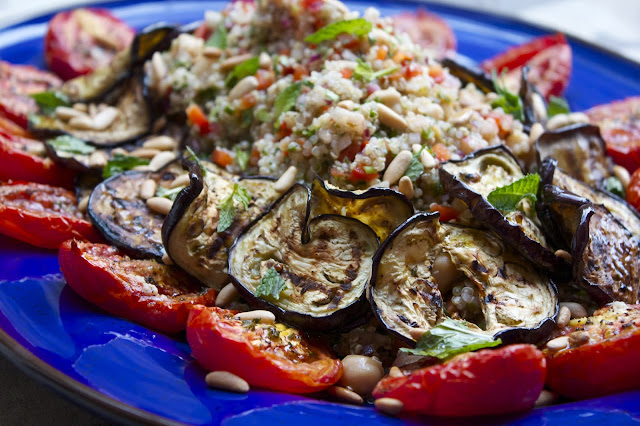 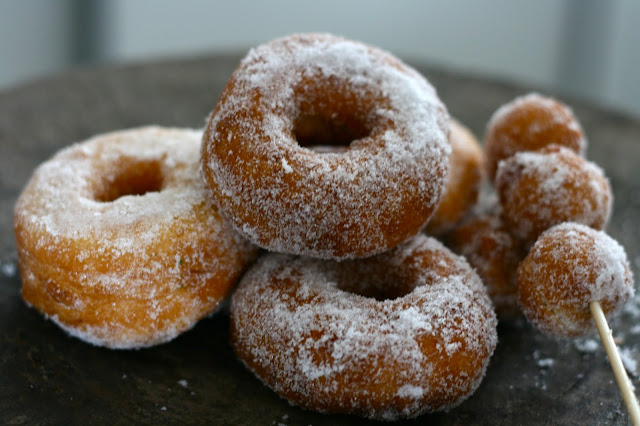 I had a real craving for dougnuts. It was one of those that came on all of a sudden and was nagging me something silly. I googled 'quick doughnuts' and there it was, a total du-darrr moment. Dan Lepard comes to the rescue again with these creme fraiche beauties, link here. I followed the recipe exactly, and they were lip smackingly delicious. The only change I made was with the sugar, I just love that caster sugar kiss when your lips hit a doughnut, reminds me of the games you would play as a child where you weren't allowed to lick your lips!

I leave you with one of my favourite Oscar Wilde quotes
“Between the optimist and the pessimist, the difference is droll. The optimist sees the doughnut; the pessimist the hole!”

Well, I must be somewhere in the middle, because I saw the holes and fried those too.. and then skewered them and drizzled salted caramel all over. Oh yeaaaaah! 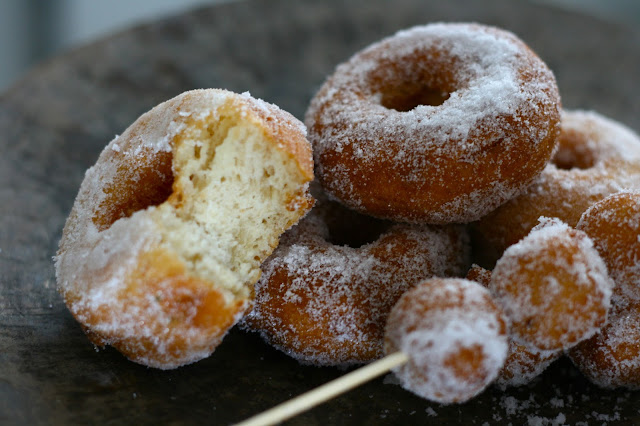 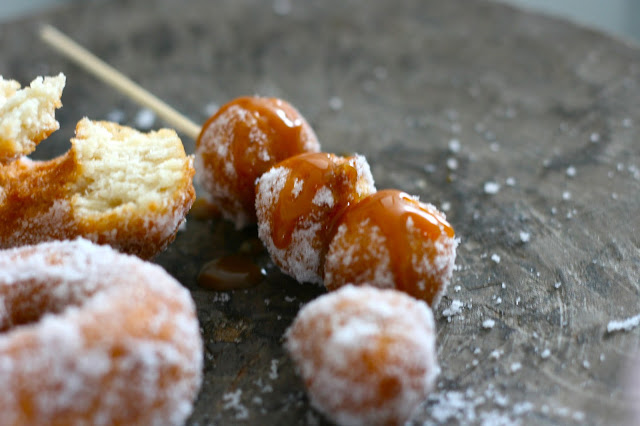