As a bit of a sciencephobe, I don't want to get too involved with the art of the perfect macaron. Thing is, to fund a Laduree Macaron habit, I'd have to do something illegal and it's crazy when you think the ingredients aren't expensive.
I used a pear flavouring concentrate thingy for the macarons and a homemade blackberry syrup for the ganache.
They taste gorgeous, have the super shiny top that cracks and gives way to that chewy middle but I definitely tapped the hell out these poor things to ensure no bubbles and therefore I can only guess that's why the tops are flat. It seems like I always sacrifice one element for another. Here is the video and recipe I used (I try a different recipe every time) I think the girl explains it all rather clearly. If you have any tips to pass my way please do!
The only tip I would pass on would be not to make them on a wet/humid day. 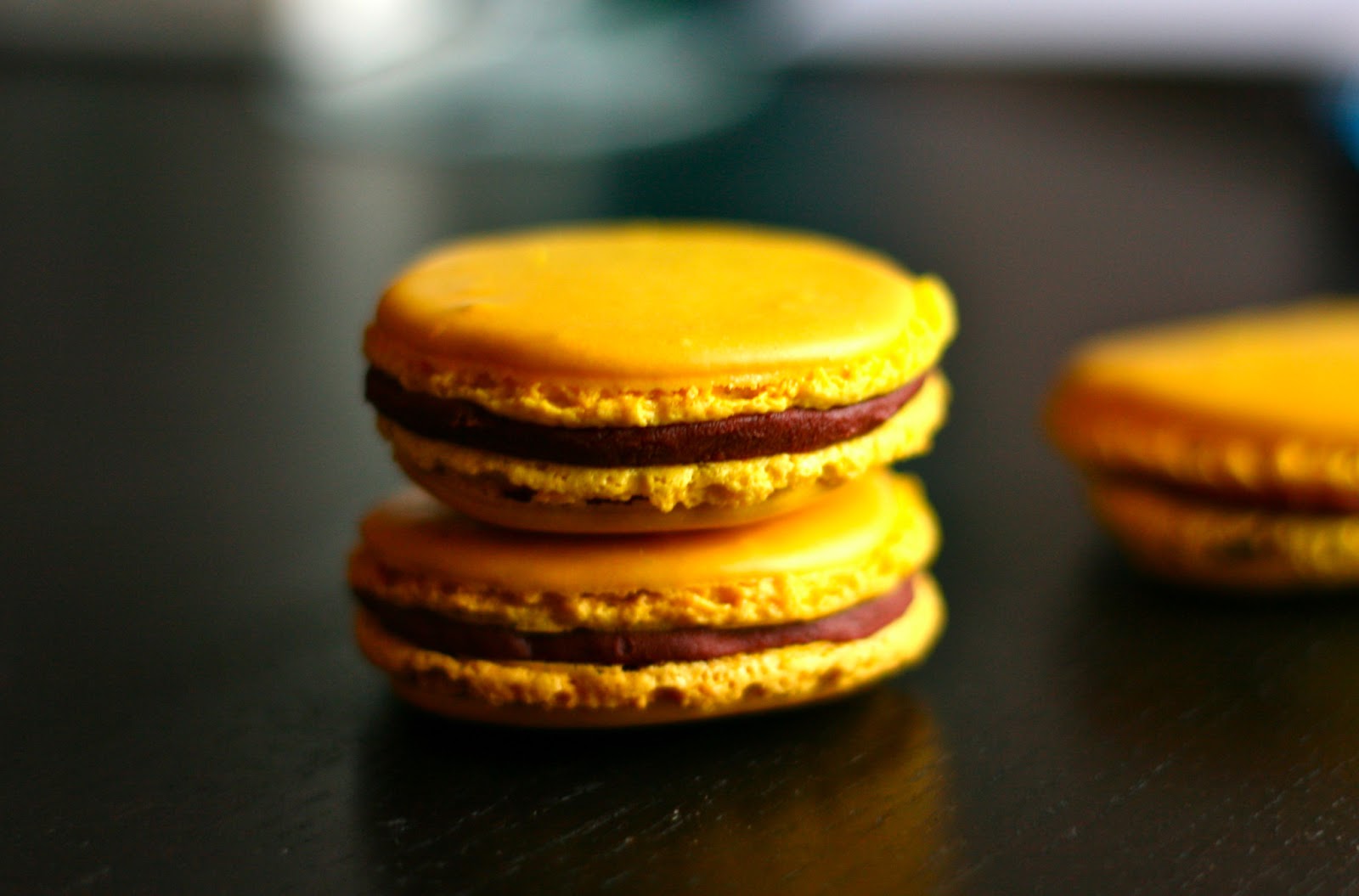 I wish people (like the girl in the video) would stop describing "perfect" macarons as crunchy on the outside and chewy on the inside. Such macarons are far from perfect. They're overcooked. Good ones have a thin shell that breaks under the slightest pressure; the insides are soft and slightly chewy at the edges. Look when she bites into one, the shell is one large airpocket because the meringue has collapsed. And that large, brittle piece of shell that falls to the floor as she takes a bite is not a desirable outcome. No amount of "ageing" in the fridge is gonna rescue those.

Yours might be flat beacuse all that tapping caused them to spread too much. A couple of taps is usually fine as there's never that many large bubbles trapped. Or maybe you overmixed the batter, again leading to spreading. Try a slightly thicker mix and only tap enough to remove any peaks.

Yes, I did tap them too much, I kind of knew it when I was doing it! I'm not sure how many 'turns' to do whilst mixing after, everyone says something different. It is very possible I over mixed. I suppose it is something that comes with practice. The shell was thin and silky, just like you say it should be and it didn't come away from the macaron just like the Laduree macarons,so I was thrilled with that. Just need to work on the shape. Thanks for your help Sam.

These look delicious. I made macarons this weekend too and think mine are the opposite - a little bit too domed. Never mind, they tasted yummy. What was the pear flavouring you used - bought or homemade?

The first time I made macarons, I had cracked tops, which I've since remedied. But I have also experienced the same thing with flat macarons. Still working on getting them right. Practice practice!!

thelittleloaf - It was bought, I've had it for ages and not used it. I suppose as long as they taste good that is all that matters.

Tartlet Sweets- so many variables. I can make them domed but seem to lose the shine. One thing for another!

So beautiful this yellow! Félicitation!

Hello there, just became aware of your blog through Google, and found that
it's truly informative. I'm going to watch out for brussels.
I'll appreciate if you continue this in future. Many people will be benefited from your writing. Cheers!