A Foodie Weekend in London

As much as I love getting back to London after long catering stints in Spain, I love getting out of London too. Last Summer my most memorable trip was to Kent, for a day of cherry picking, apple pressing and cake baking with a friend. This year I was kindly invited to experience Jamie Oliver's Big Feastival at Alex James' home in Oxfordshire. I asked my friend Squeeze if she fancied bombing it down the motorway for some sunshine, food, cocktails and an outdoor concert and we were there in a jiffy. 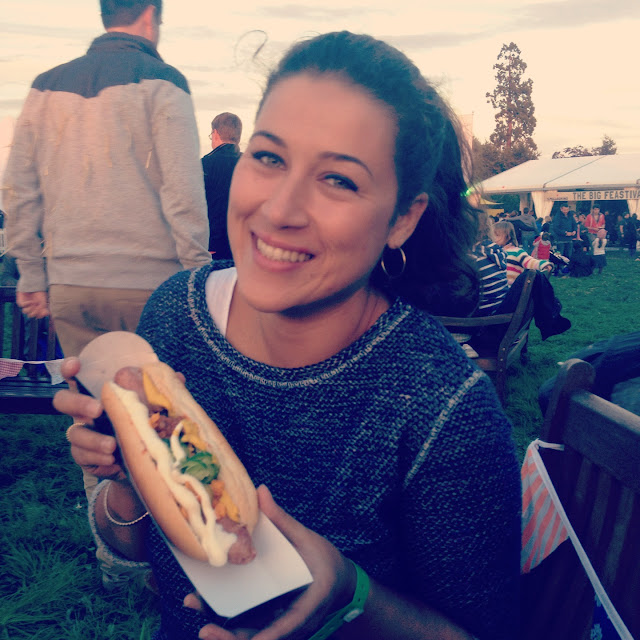 This is me looking chuffed with my Barbecoa chilli dog.
It was a celebration of food and music, the great outdoors and a bit of a mess about. I would really recommend anyone with kids to try it next year. Go for a day, or camp out all weekend, there are plenty of things for kids to do whilst you sample local produce, street food such (mmm...Pizza Pilgrims) and cocktails and you can all enjoy a wee boogie to the live acts, we got there in time for Paloma Faith and The Noisettes who were both fantastic.
So, the weekend got me thinking...Jamie Oliver seems to be like Marmite in the love him/hate him stakes.  Why is this?  Which side of the divide do you fall, I wonder?  People who have never met him in person are very quick to pronounce their dislike which seems grossly unfair. Not only in respect of his success in removing the “Turkey Twizzler” and other nasties from school dinners and his Fifteen project amongst others, but also these fault finders conveniently overlook the astonishing energy, entrepreneurism, professionalism, courage, conscience, care and responsibility that this man must have to have achieved and maintain what he has. Are his critics jealous that this cheeky chappy from Essex made it so big? I think the majority are trivial and a tad petty in their judgement. 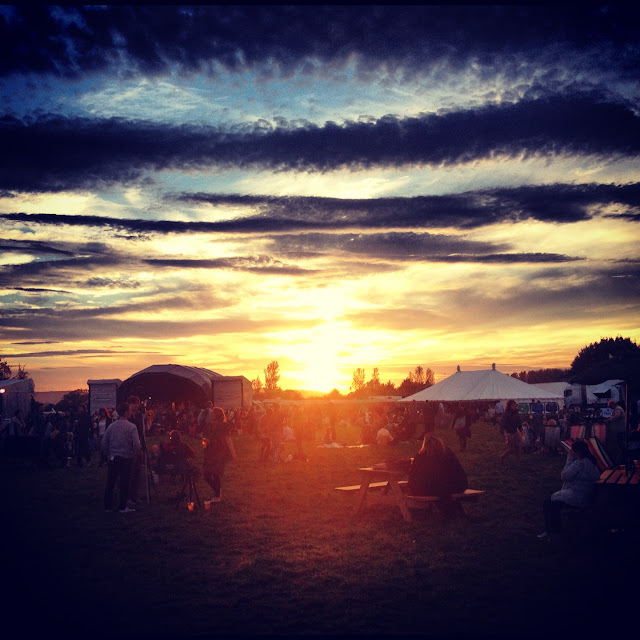 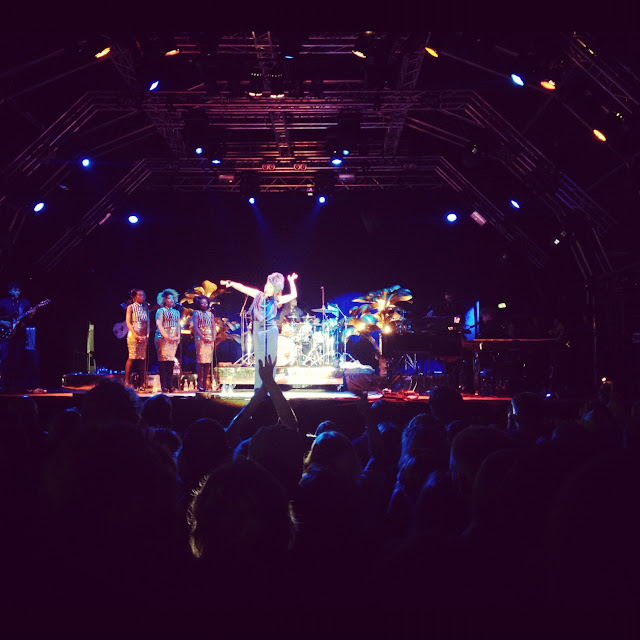 After all the excitement of the weather warming up again we had a barbeque on the Sunday. I've been a little obsessed with ribs this Summer and the smells wafting from the BBQ really got the dogs' tails wagging. 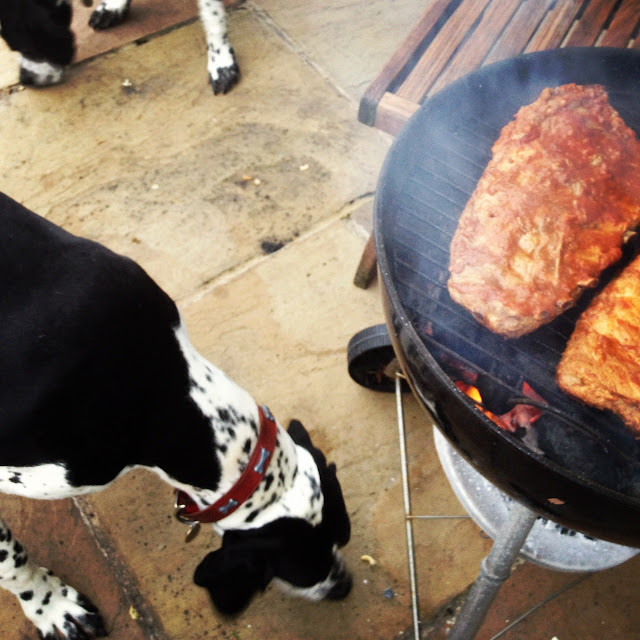 I have to scribble down my recipe for you some time. 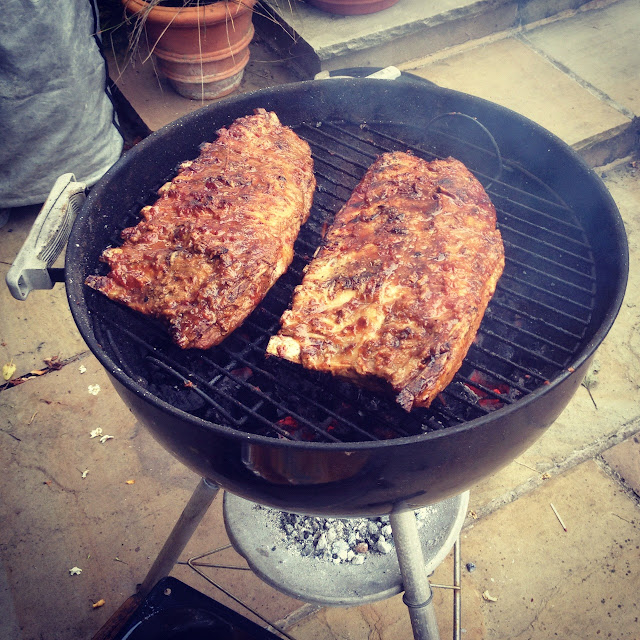 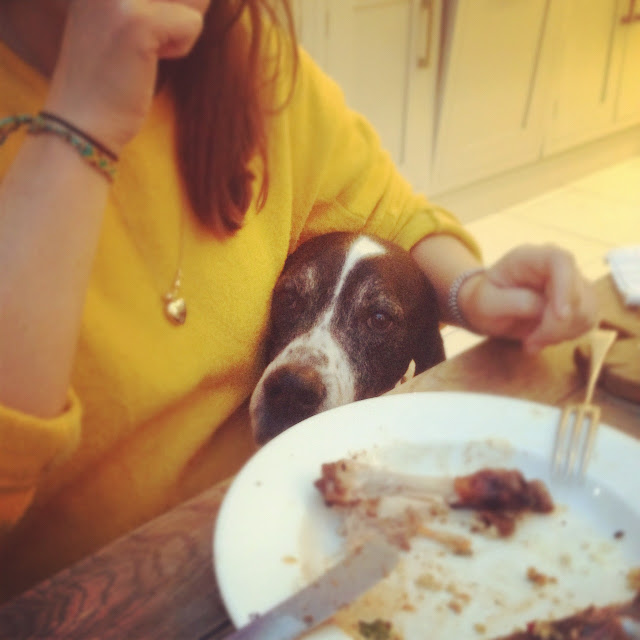 As if the weekend hadn't been heavy enough on the plate, on Monday Reiko and I popped to Richard Corrigan's Oyster Shucking Championships at Bentley's on a glorious sunny afternoon. A wee band tooted away, welcoming us in and we arrived at the same time as a dancing bottle of tabasco, natch. It was such a fun afternoon celebrating the start of the Native Oyster season, sipping on champagne and slurping down oysters. So, I think the rules were, to shuck a box of oysters (30)and to turn them over in their shell in the quickest time but cleanly, with no grit/shell. 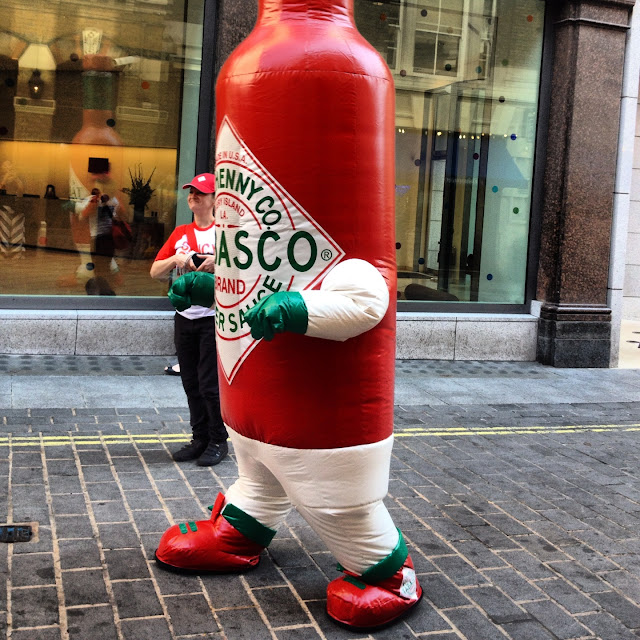 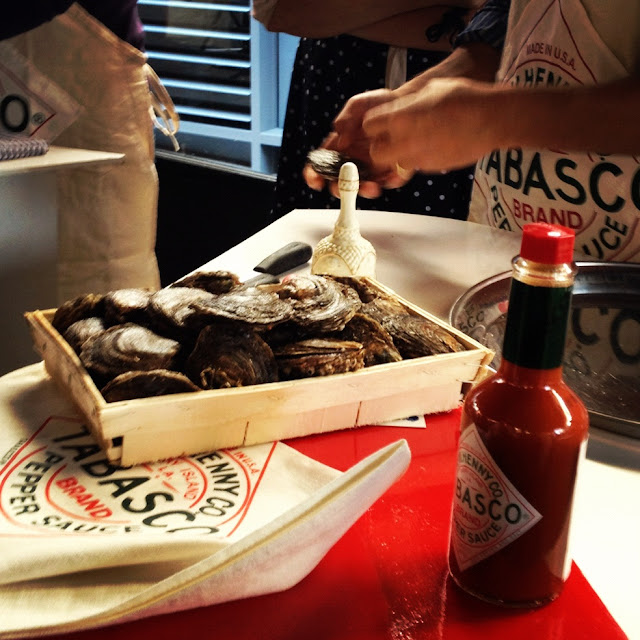 I would love to be a purist and declare my love of an oyster unadorned. I however, love a little spice in the form of a splash of Tabasco and a squeeze of lime. I particularly enjoyed Corrigan's Vietnamese style oysters, recipe found here. 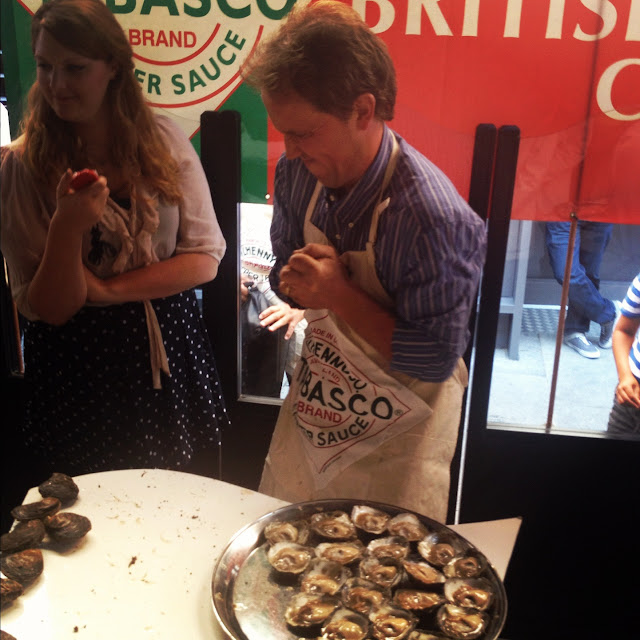 The muscle needed, the faces pulled, all made for quite a show. Richard, of course won the celebrity round making his opponents look sloppy in comparison. 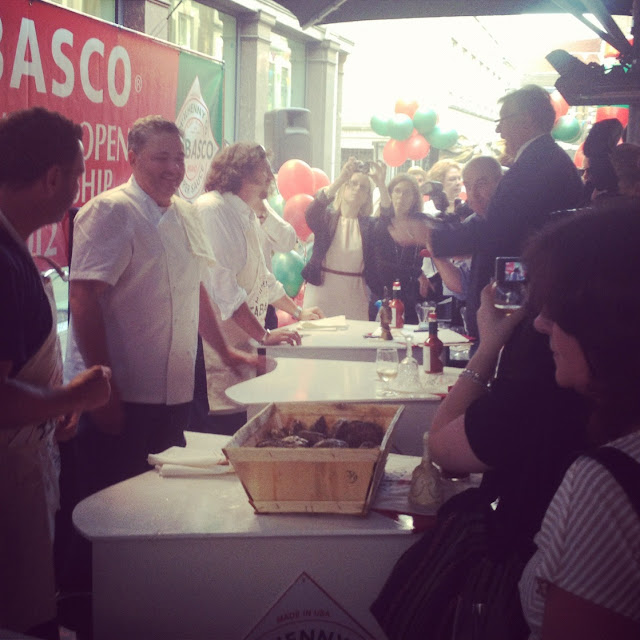 HAD to include this pic, I met Ainsley Harriot, what a charmer. If you are around my age, you would have been slumped on the sofa after school watching this guy add a bit of fun to the kitchen with his Percy Pepper and Susie Salt. Champ! 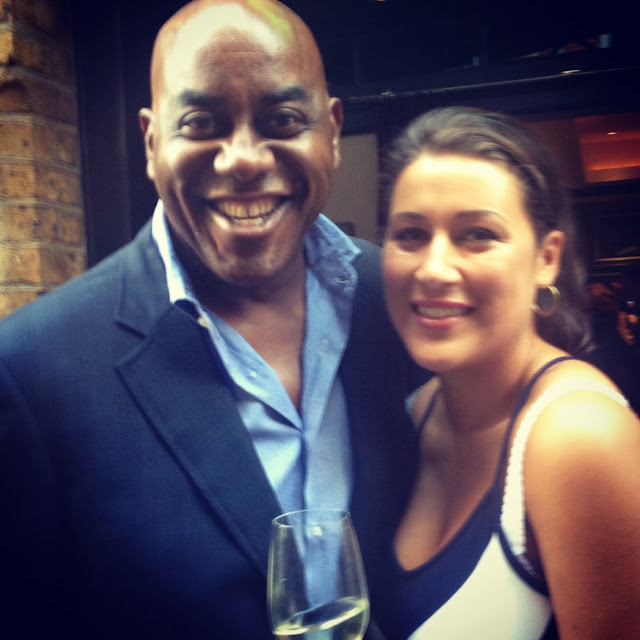 Rather ashamedly @Agirlhastoeat and I jumped straight on the tube after to Balham for a wonderful meal prepared by Omar Allibhoy. He also did some fab demos whilst we munched on olives and tapas. My favourite tip was never to beat eggs. Just to use a fork very lightly to break up the yolk and white, I tried it out and it is better for achieving that runny middle I so love and you don't get a smidgen of the egg being spongy. My tortilla- 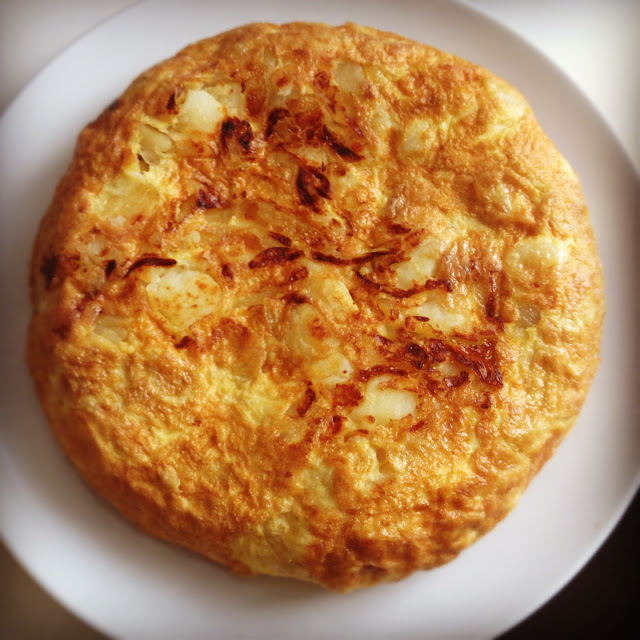 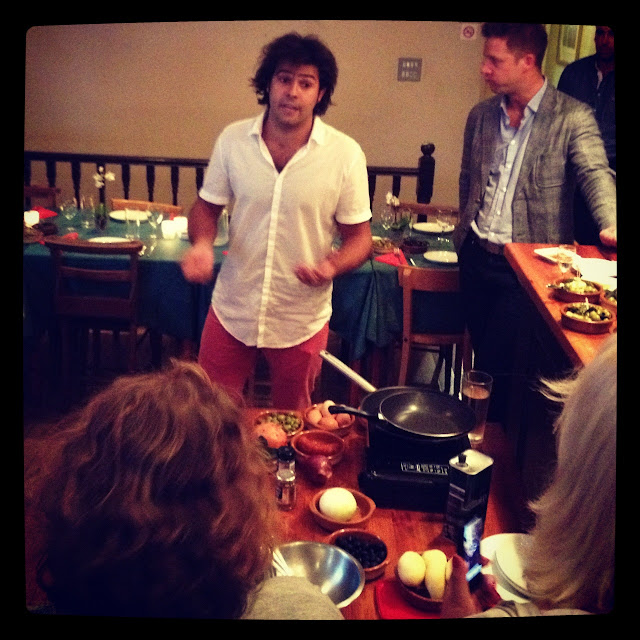 Omar's recipe for Tortilla with chorizo and olives - Serves 4